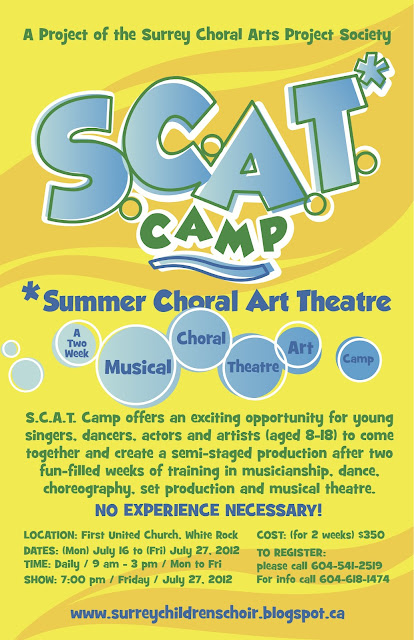 Bumming out that choir is over for the summer?  Have no fear- S.C.A.T camp is here!

At the end of these 2 weeks, S.C.A.T participants stage a show centred on a theme that includes songs from the jazz, classical, folk, and Broadway genres, among others.  "Campers" will also participate in set painting and the creation of props and costumes.

Participants will be given the opportunity to audition for vocal, dance or acting solo parts to be performed as part of the final show, following a potluck dinner for family and friends.

Stephen Horning, B.Mus, Ed. Dip. graduated from the University of Victoria in 1978, majoring in composition, piano, and choral studies.  Stephen taught twelve years in the Campbell River School District, where he founded the Campbell River Children's Choir.  Stephen moved to the lower lainland in 1989 to teach in the Surrey School District.  In 1992, he founded the Surrey Children's Choir.  Stephen was recipient of the 1999 Willan Award for Outstanding Service to the British Columbia Choral Federation.  In 2008, Stephen received the Surrey Civic Treasure Award for the his contribution to Arts in Surrey.

Carol Coulson attended Dalhousie University, UBC, and received a Master degree from the University of Lublin, Poland, in Folk dance and Choreography.  She performed with the Halifax Theatre Ballet Company and the New York City Ballet under George Balanchine.  Carol has produced, directed, and choreographed many spectacular events in Vancouver, such as the Opening Ceremonies of Expo '86, the Papal visit, and two Grey Cup half-time shows.  Carol is also an accomplished painter and the resident choreographer with the Surrey Children's Choir.

Katie Tennant-Horning is a graduate of Emily Carr University of Art and Design.  She has years of experience working with children and is currently enrolled at UBC in the teacher training program.

Ewa Lajlo has studied at the National School of Art, Zielona Gora, Poland and is currently enrolled in the Fine Arts Program at Langara College in Vancouver.

Danica Kell is a recent UBC graduate and current program manager for the Surrey Children's Choir.  She has over 16 years of choral singing experience and has worked as a musical summer camp assistant for the BC Choral Federation.


Composed by the Surrey Children's Choir at 4:17 pm No comments: